Yes, children, yes. Yes, I am aware that Monday’s offering, Big Babies, is quite disturbing. Yes. I am also aware that it is the kind of disturbing that rivets those disturbed. Those oversized, overstuffed tykes are not unlike a puffy, sore, just-about-to-ooze-blood hangnail that you grip between your teeth and then peel down until your entire finger is flayed or fileted. Only not quite as tasty or cuddly.
Because I have not yet had lunch and thus cannot display photos of pretty food for you to look at instead (because, really, what else is there to photograph other than big babies and pretty food), I will show you another big baby that I encountered the same Monday, just outside Cafe Bari, several blocks south of the “Big Babies” display. This is the kind of baby I prefer over the perky, kewpie variety. Beggar is better than bigger, wouldn’t you agree? 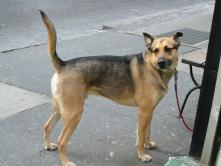